Five trends in healthcare you should know about

Home » Five trends in healthcare you should know about

Five trends in healthcare you should know about

In short, value-based healthcare means more health for less or the same amount of money. This is necessary to be able to take on future challenges.

We are being confronted with a growing and changing demand for healthcare and an enormous rise in healthcare costs. This is because we are living longer and don’t always live a healthier lifestyle. We are seeing an increase in diseases of affluence, such as obesity and diabetes. At the same time patients are playing a more active role in (co)deciding on their treatment and the desired results. Healthcare costs are also increasing due to innovations and new treatment options.

One of the big challenges for the future of healthcare is to counteract the current fragmentation of healthcare. We need to learn to work together to overcome the barriers between healthcare organizations. This is easier said than done, which means there are not many successful cooperations and it is tempting to give up and continue doing things the way we are used to doing them. Or to not even try to change anything.

In this blog we will show you why this is not an option. We will explain this based on important trends within healthcare in the next few decades. After reading this blog, it will be clear that we do need to go down the road of value-based healthcare for a healthy, affordable and futureproof healthcare system.

There are a few alarming developments on the side of the demand for care. Those are continuing ageing of the population, increase in the number of chronic, multimorbid patients and increase of healthcare costs.

Everyone knows our population is ageing. But how serious is that, really? The number of elderly people is growing and will continue to grow in the decades to come. In 2000 there were 2.15 million people over 65, in 2030 there will be 4.25 million in the Netherlands (image 1). There is an expected peak in 2041 with 4.6 million people aged over 65 years old. This increase has two important consequences. First, it will lead to an increase in the demand for care. Because even though standards of health are gradually improving as we age, in almost all cases we develop one or multiple chronic conditions as we get older. This is partly due to progressive medical technology, which means conditions that were fatal now become chronic in character. Secondly, the ageing population leads to a shift in the ratio between working and non-working people. This leads to capacity problems in the labor market, especially within the healthcare sector. There won’t be enough medical staff in the future.

In 2011 the results of research into the occurrence of multimorbidity in GP practices in the Netherlands were published (Van Oostrom et al, NTvG, 2011). Almost 13% of the entire population and 37% of people over 55 had 2 or more chronic illnesses. 70% of patients of 55 years and older with 1 out of 10 selected diseases had at least one other condition as well (see image 2). This means multimorbidity occurred in over two thirds of elderly people with a common chronic disease.

Due to the ageing population and many people’s unhealthy lifestyles, a further increase of chronic conditions and multimorbidity is to be expected. Recent figures from the Netherlands National Institute for Public Health and the Environment (RIVM) confirm this. In 2016, 8.8 million Dutch people had one or more chronical diseases, which is 52% of the population. Among people over 75, roughly 90% had one or more chronic conditions. This is bound to make a considerable impact on the demand for more and more complex healthcare.

Healthcare expenses have risen continuously since 1972, from 8% to 13% of the gross domestic product (GDP). Calculations by the RIVM have concluded that healthcare expenditure will continue to rise in the coming decades. This is due to the ageing population and the increase in healthcare consumption due to better and more expensive healthcare. In 2040, the healthcare expenditures in the Netherlands are expected to be between 6% and 18% higher than they are now. Healthcare costs are just over €5000 per person per year on average now, but in 2040 that will have risen to €9600 (based on the current price level). This explosive growth is inevitable if healthcare costs continue to rise at the current speed and no substantive measures are taken.

The big risk alarm in relation to the healthcare supply is wastage. There are different forms of wastage. In the US, they researched the degree of wastage, which leads to shocking insights. It turned out that 1/3 of the healthcare costs per person was being unnecessarily wasted; almost $3000 per person per year (Image 3). The Dutch Ministry of Health, Welfare & Sport (VWS) advised that the same be determined for the Netherlands based on the waste indicators of Schwarts et al (2014). An article by Miller et al (Bloomberg, 2018) confirmed that this is necessary. They ranked countries with over 5 million inhabitants, an average life expectancy of over 70 and over $5000 in healthcare expenses per capita annually. Of the 56 countries, the Netherlands ranked 28th. There is definitely some progress to be made there. The problem is that often we don’t have the necessary data to map the wastage in this country. We will go through the indicators as used by Schwarts for the situation in the Netherlands.

The number of doctor’s visits, by-pass surgeries, and angioplasty treatments is high in the Netherlands compared to other countries. One could conclude that this is the result of unnecessary care. Double diagnoses, polypharmacy and other forms of unnecessary care are common in the Netherlands. One of the causes is faltering cooperation and communications. Instead of looking at what a patient needs in an integrated manner, each healthcare provider does their own thing without aligning it with the treatment by others.

Everyone works on their own island and data and results are not shared. There is for example a lack of joint responsibility and joint data management. Healthcare is fragmented. This leads to poor coordination and inefficiency.

The autonomous price increases in the market also affect the healthcare sector. Everything is becoming more expensive. These increases in price do not automatically lead to better healthcare outcomes for the patient.

This includes all kinds of declaration fraud. Wastage due to fraud in the healthcare sector is a growing issue in Europe and forms a serious threat for the healthcare system (Mikkers et al, 2017).

Insufficient attention for preventative measures leads to unnecessary medical intervention. Simply put: it is better and cheaper to be safe than sorry. But in practice, the prevention policy is underdeveloped. This goes for the Netherlands as well.

No one can deny the worrying nature of the story above and that we cannot do nothing. We need a new healthcare system. In that regard, there are several developments going on. We can deduce five trends (see image 4) that can help us take on the increasing gap between the supply of and demand for healthcare. We will explain those below.

For a number of years now, it’s been a trend to limit the welfare state. The government’s responsibilities are increasingly transferred to organizations and citizens. Instead of ‘the state will take care of you’ there is an increasing tendency towards market mechanisms and regionalization. The idea is that this brings healthcare closer to the patient. You can see that for example in curative care or the role of the healthcare insurance companies. The reasoning behind – whether that reasoning is correct is another matter – is that the government cannot take care of matters as efficiently as the market can.

There is a lot of growth in consumerism of healthcare, in other words in offering healthcare as a product or service directly to people. An increasing number of people decides to have certain procedures performed in private clinics. The patient as consumer is gaining power. As a consumer, you choose your supplier based on the best value (quality divided by price), but in order to do that, it needs to be transparent. That is not always the case within the healthcare sector.

There is a lot to be gained when it comes to digitalization, although there are lots of initiatives in this area. We can see an enormous growth in the number of e-Health tools that are meant to make healthcare more efficient and more accessible. A positive development, except for the fact that there aren’t many whose added value can be verified. There are also lots of improvements to be made when it comes to the accessibility of data, like via the Electronic Health Records (EHR). This is essential to provide regionally aligned healthcare services and to be prepared for the future trends in the healthcare demand. If you use digitalization the right way, there can be a fast return. That can be an important weapon to take on future issues. In addition, it can strengthen the position of the patient as a consumer, which means quality, costs and performance become increasingly transparent.

#4 From volume to value

We can put ‘the new definition of health’ under the umbrella of this trend. In this concept, health is not seen as the presence or absence of disease, but as people’s ability to take on (changing) physical, emotional and social life challenge and to take matters into their own hands as much as possible. Even though this concept is widely criticized, it is a big plus that the focus is on keeping people healthy. By investing in that, we can decrease the problems we are bound to encounter. Because – as we said earlier – better safe than sorry. Better for the people themselves, but also better for our wallets. General practitioners need to play a massive role in this transition, but people themselves can off course contribute as well. 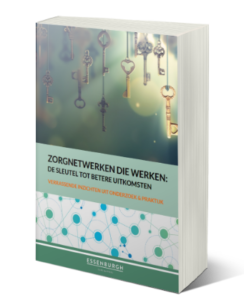